Monique Gibson is the queen of creature comforts—who else pours takeout coffee into proper ceramic cups when a visitor comes calling at her historic Italianate townhouse in Manhattan’s East Village? There’s a spread of food on the dining table, and she says in a down-home Virginia twang, “Let me know if you want Champagne; we keep stocks of it.”

Easygoing in effect but exacting in execution, this attention to detail is just a taste of the treatment Gibson, an AD100 interior designer, lavishes on her loyal clients—a list that includes Jon Bon Jovi, Meg Ryan, and Jon Stewart—who book meetings at the four-story brownstone building where she lives and works. 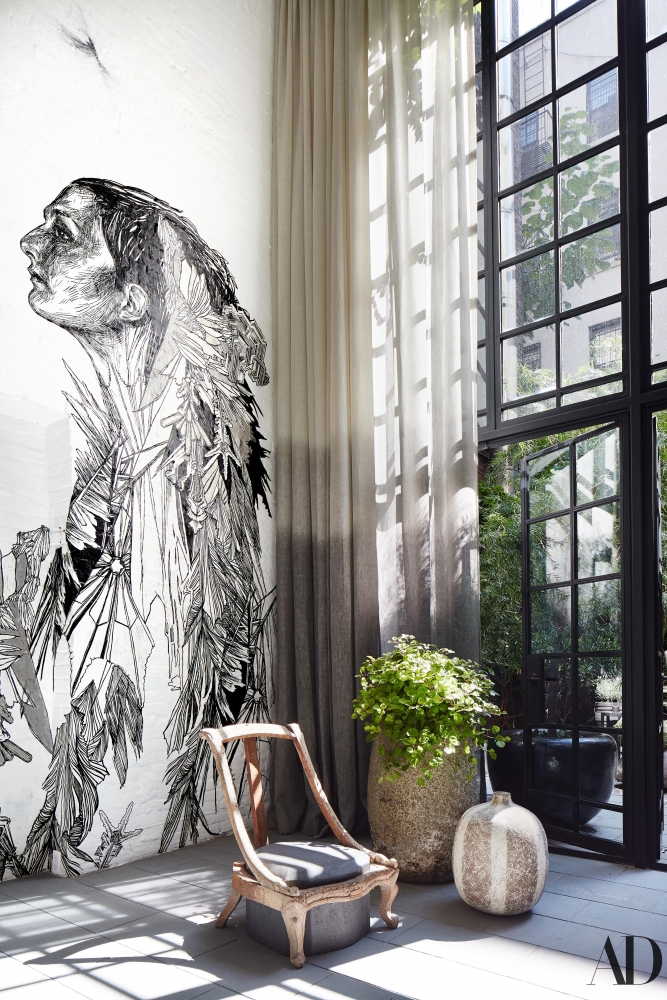 “I started with rock stars,” Gibson explains, curled up in a 1920s Erik Gunnar Asplund easy chair. It was Elton John, after all, who gave the fledgling Atlanta-based designer (and her then-partner Fred Dilger) his home in the South of France as one of their first projects. “I started with unconventional schedules,” she continues. “I’ve been on a lot of tours. A client will say, ‘I’ll pick you up on a plane and we’ll do the presentation in flight.’”

Accommodating those jet-setting agendas, in many ways, is what led her to the Manhattan property several years back. As her growing team searched for a larger workplace, her office manager pointed out one of those unbelievable truths of New York City real estate: “We could have a whole house for what an office costs.” Gibson was already practically living at work—her insane travel schedule having reduced her beloved apartment in the nearby Police Building to a veritable luggage check—so she decided to try something new: combine the two. She’d live on the top two floors and work (alongside her team of five) on the lower levels.

“Next weekend there’s a client who can only meet on Sunday at 8 p.m.,” Gibson explains. “So I’ll bring in a chef, set everything up, and do the meeting right here. Clients love it because they can sit on a sofa and say, ‘This isn’t deep enough.’ They can have their own chairs brought in.” Pointing to a lava-stone side table by Stéphane Parmentier, she adds, “This table isn’t mine. It’s going out to a client in a few days.”

Gibson remembers playing in the woods as a kid with a snakebite kit strapped to her leg. “When I got tired, I would put my back against a tree because my grandmother told me it would give me energy.” These days, you might spot the designer leaning on the giant sycamore outside her house while she waits for an Uber. “The neighbors must think I’m crazy,” she whispers dramatically.

Her lucky break with Elton John was just that. “Gianni Versace was sending fabric for cushions and drapery, Julian Schnabel made a dining table and a bed, Scott Frances photographed it, and AD published it,” the designer remembers of the whirlwind commission. “Not all projects are like that.”

But the referrals that followed (and the ones after that and after that) were proof of what she could do. Elton John referred Gibson to Jon Bon Jovi as well as his own manager, John Reid, who referred her to musician John Mellencamp, who spread the word to Meg Ryan. She’s done five houses for Mellencamp—including one in South Carolina (AD, March 2014)— and she’s become so close with Bon Jovi after six homes that she spends Thanksgivings with him and his family.

“My life is about having relationships with people who trust me to tell their story,” Gibson says. Her own home proves it, being a sunny, breezy laboratory for the ideas she will present or has presented to her clients. A flock of birds—a study for a mural in an upstate New York house—whips up the stairwell.

At the foot of those stairs, a daring wheat-paste image of a woman covers one wall. “This is for a client in France,” Gibson explains. “He has a chapel on the property but is not particularly religious. I thought street art would be interesting, so I commissioned the artist Swoon to create what I call modern Madonnas.” After seeing the wheat-paste example at Gibson’s place, the client was sold. 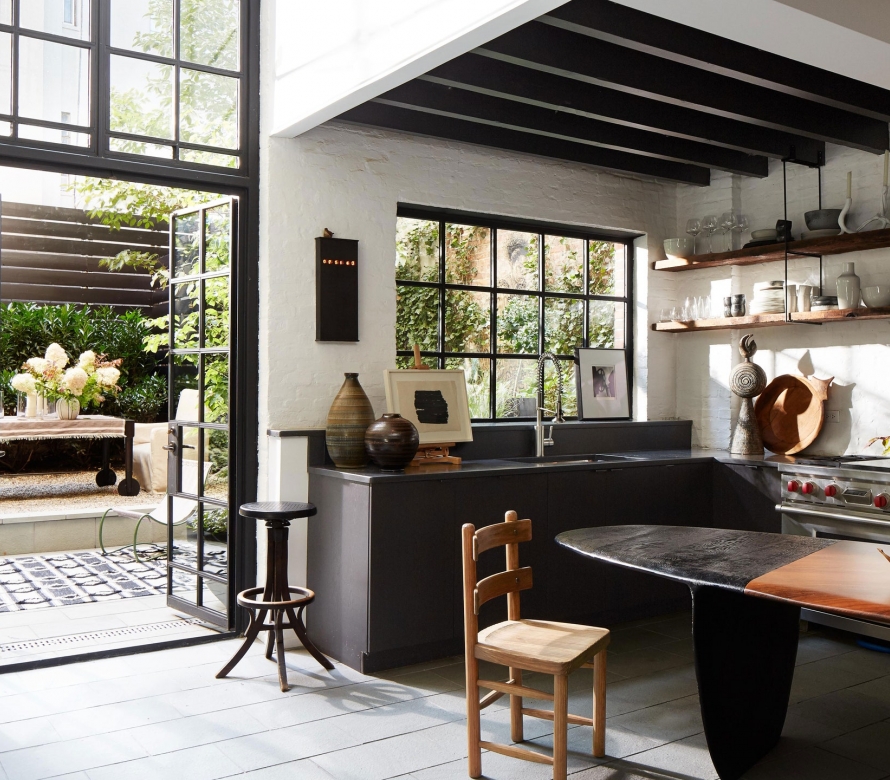 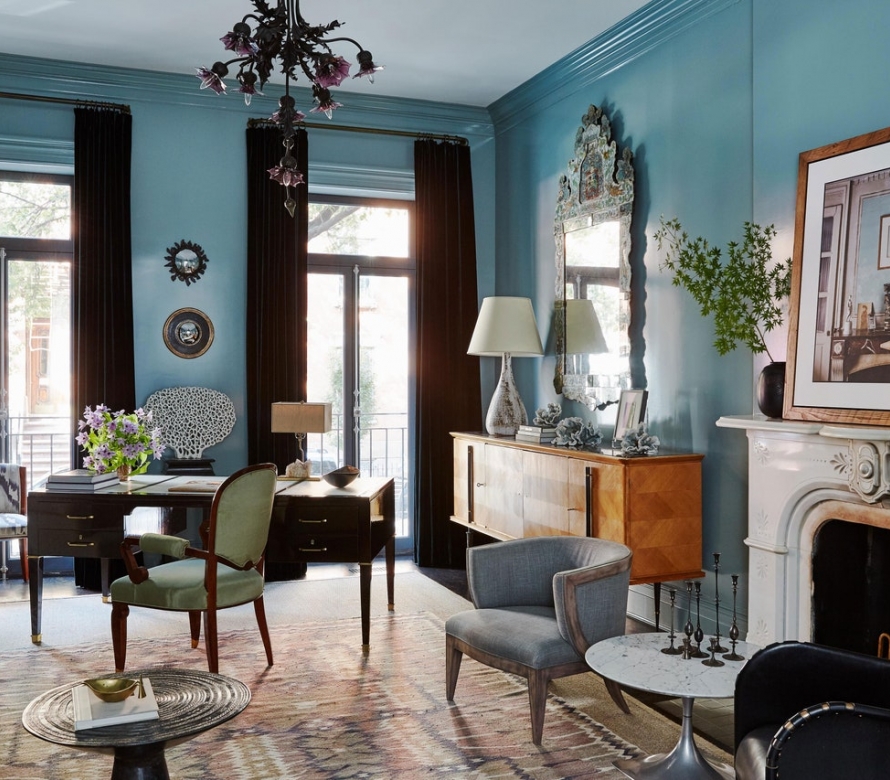 It’s a living canvas,” she says of her home. “Sometimes things come in and go out very quickly.

There are a few things Gibson has held on to through the years, however. Among them is the living room’s pair of Hiroshi Asada paintings, given to her by Elton John and cleverly mounted so they slide open to reveal a television. The room’s Asplund chair is the first piece of furniture she ever bought for herself at auction, and a petite Louis XVI antique once served as her first desk chair. She’s also quite fond of a table by Israeli furnituremaker Gal Gaon. “Sometimes it’s my desk, sometimes it’s my meeting room, sometimes it’s my kitchen table,” she says, though she concludes, “I’m not attached to much; I believe we’re just the temporary keepers of things.”

Gibson doesn’t talk too much about her house or her taste. Rather, she explains, “it’s about wanting you to be comfortable here. I want anyone who comes here to be comfortable.” And welcome. Which explains why, moments later, she asks, “Why don’t you just stay for dinner?”